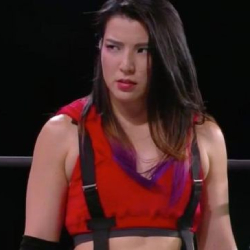 
Hikaru Shida is a Japanese professional wrestler and actress currently signed to All Elite Wrestling. She debuted in 2008 and since then has bounced around in promotions such as Ice Ribbon and numerous indie promotions as a freelance performer. As a child she practiced kendo and judo and achieved three-dan in the ladder. Before turning to wrestling, Shida built an expansive career in acting, most notably the television show Muscle Venus, and would later form an idol group with her castmates, who would also soon go on to follow Shida into her wrestling career.
Shida won the Womens' World Champion belt after defeating Nyla Rose, the previous title holder, at AEW Double or Nothing in 2020. Her current competition was Japanese wrestler Ryo Mizunami, and at Revolution 2021 Shida successfully defended her title in a match against Mizunami. After the match, however, Shida was ambushed by Nyla Rose, Maki Itoh, and Britt Baker.
RETURN